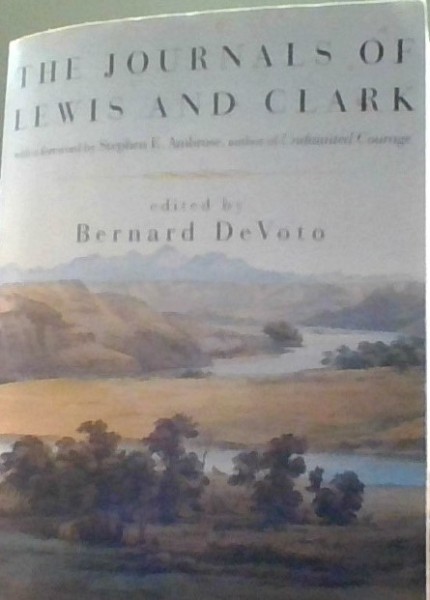 Six weeks into the New Year, and I am finally starting a blog post again. On the positive side, I’ve been reading more, I’ve been singing more, and I’ve completed a few in-home projects that were plaguing, or whispering at me, for some time. I haven’t arrived at all my goals, but I’ve made progress in a few areas. I don’t much set resolutions as much as I did when I was younger. Either I’m more realistic, or it’s because I take a different approach. Mainly, I plod along as best I can, while also keeping some goals ahead of me. I’ve also come to realize that, in living the life God has given me, while it is true I can control some aspects, many more facets of life are way beyond my purview.

At any rate, I am happy to report that I finally finished reading “The Journals of Lewis and Clark”, edited by Bernard De Voto (ISBN  0-395-85996-4, Mariner Books, 1953,1997, New York, 504pp). According to my reading notes, I began this first reading in the autumn of 2015. So, I suppose I could say it took me about as long to read it, as the explorers took to experience it.  The entire journey took 28 months from St. Louis, Missouri, up the Missouri River to Mandan, ND, thence westward to the Pacific Ocean, and back again. Preparations commenced eleven months prior to departure, after President Thomas Jefferson wrote his instructions to Captain Meriweather Lewis in June of 1803. The United States and France signed the treaty in May of 1803, and Congress ratified it in December of that year.

I very much enjoyed the book. I had some motivations beyond American History for reading the book, but I would highly recommend it. I should provide a few notes of fair warning for the would-be reader, however. First, the spelling will make English major everywhere wince. Spelling at that period in American history was largely phonetic, so even among educated people as Meriweather Lewis, the construction is all over the place. Secondly, some readers, in reading from a modern perspective, may find offensive the intention of the United States, and the approach of the explorers. At the same time that the captains make grand claims and promises that were later forgotten or ignored, De Voto makes the case that the expedition leaders, particularly Captain William Clark, admired and respected the native people they met and traded with along the way. They did meet some, however, that respected not the commonly accepted codes of the other native nations. In these situations, and during periods of near starvation, the Corps, even according to their own admission, failed to live up to their own moral code.

I hope to share some further thoughts and quotes from the book in the weeks ahead. However, I do want to mention some of my reasons for reading the book, and perhaps, some regrets, as well. First, as a native South Dakotan, the ghosts of the explorers and native peoples have long whispered in my ear. Travel across the two Dakotas, through present-day Wyoming, Montana, Idaho, and Washington, and signs along many of the major roads proclaim “The Lewis and Clark Trail”. Memories of the sights and sounds of the wind-blown prairies, the looming mountains, and the unending skies begin in childhood and persist into the present time. I have walked, and driven, and ridden, and flown across this chunk of the United States many times. So, it is a desire to attach reason and understanding to the sentiment previously felt. Secondly, the conquering of an historically important document may be likened to the desire of some to hike the Bright Angel trail to the Colorado River of the Grand Canyon or for others to climb Mount Everest. It is a challenge. The book is not always easy reading, partly because of the separation of 200 years, and partly because of the distinctiveness and ruggedness of the American West, even today. Geography affects culture more than we know.

But, having said all of that, I do have some regrets; two, principally. First, on the one hand, I regret I took so long to finish reading it. I was easily distracted by lighter reading, and more intriguing activities. To be fair, though, it is the kind of writing that does not easily yield its treasures in the presence of multi-tasking, visual media, or groups of people, for that matter. It is the kind of writing that one reads more easily in the quiet hours before bed, or after the first cup of coffee in the morning before the sun rises. It is worth the effort. The second regret I have is that I took so long before I read it. That is to say, I think, in my grandparent years, that it would have been beneficial to read this book at several key points in my younger years. It may have been beneficial when my family was doggedly following the Lewis and Clark trail near Yankton and Vermillion, SD; when we stood bare-footed (sp?) in snow along Highway 2 along the route across Montana toward Expo ’74 and our double clousins in the Seattle area; when my young family and I drove all over Montana following high-school football; or even when I was hurtling through the atmosphere in a metal tube emblazoned with the Delta logo. Still, I believe in a sovereign God, and that even books have their right time and place.

With that, I leave the reader with only the contented sigh of satisfaction. Whereas, some books hold the heart so tight, one almost feels the lonliness of an empty house after the cousins leave, this book, upon completion, left me the satisfaction of a pleasing and filling meal. Lord willing, in the weeks ahead, I can share some of the reasons why.